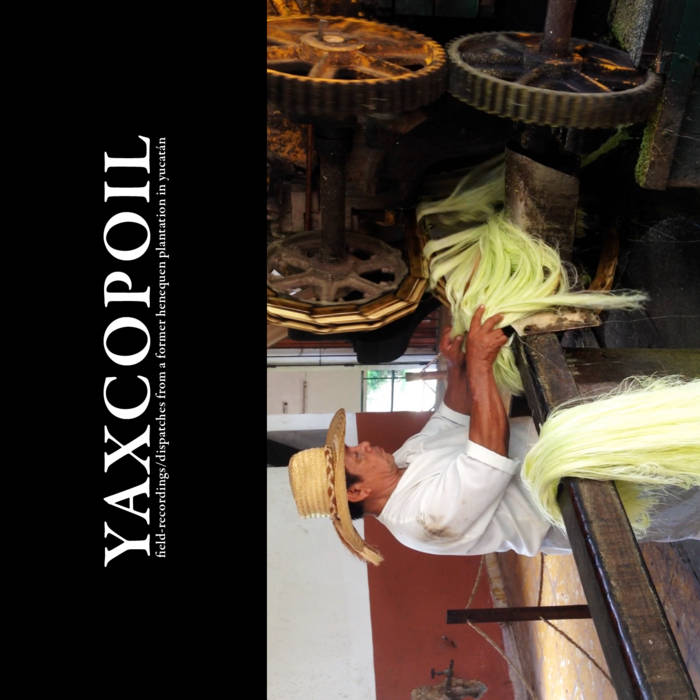 YAXCOPOIL
field-recordings/dispatches
from a former henequen plantation in Yucatán

It has been since the 17th century that the grounds of Hacienda Yaxcopoil have inscribed onto Mayan lands the imported violence and machinations of alien plunderers. Today it stands as a museum and place of (re)enactments of its former day-to-day existence, merely a shred of its 22,000 acres remaining. La casa de maquina (the machine house) preserves the industrial armature of henequen production, which the hacienda made into its most imperative duty, rolling out their exports (in the form of ropes for seafaring vessels, ports, docks, amidst other textiles) in the hunger of 19th century manufacturer's delirium. Against the brutal sun of day, no man could work; it was throughout the night that they toiled into the early day (la madrugada), harvesting fields of mighty *Agave fourcroydes* leaves in preparation to be processed, yielding the golden fiber of henequen, strands of the connective tissue of Earth's seas. These agricultural excavations went hand in hand with the usurpations of human dignity; the sounds of the massive Körting motors supplying to the psychoacoustic ear the sounds of a lost era, in which the colonial spirit drowned out all other sound-forms of the landscape, sublimating them into the dreary monotony of their perfected practice, taking all manner of life and limb into and out of its purview. This fossilized resonance is the ambience of these dispatches, a mirror into which past, present, and future(s) are fractured and splintered by the prisms of electronic instruments, taking as their own source material these sonic leaves in order to weave its own interleaved fiber. But insofar as this abstracted musical process replicates the physical reconfiguration of physical matter, may the form of its sonic imaginary negate its associated ideals; negation by way of replication.