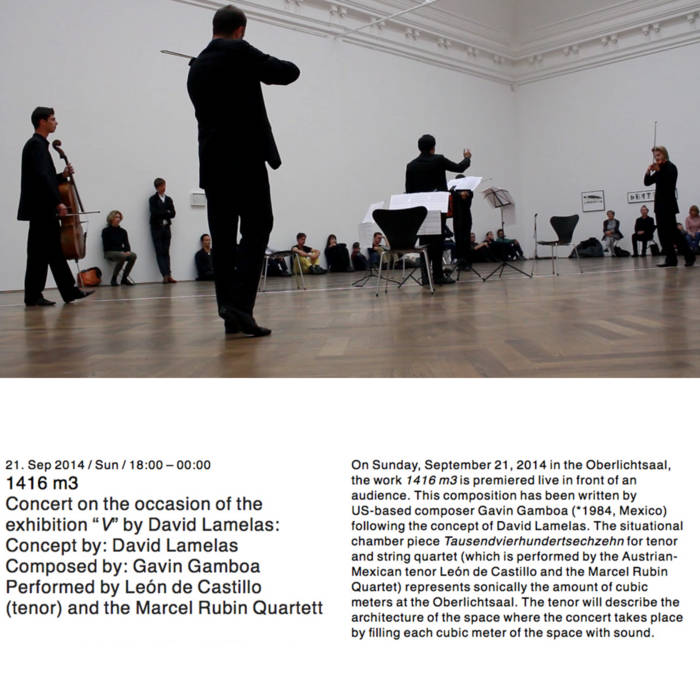 Tausendvierhundertsechzehn for Tenor and String Quartet (2014)

Concert on the occasion of the exhibition “V” by David Lamelas

Conceptual Artist David Lamelas (*1946) is known today first and foremost for his structuralist films and media installations. His solo exhibition “V” at Kunsthalle Basel, curated by Ruth Kissling, opens with a concrete object that serves as a reminder of Lamelas’s early sculptural works of the 1960s, but which also embodies his fundamental concern to liberate sculpture from the traditional ratio of mass and volume – a recurring theme within his oeuvre. For David Lamelas, sculpture is not only the aesthetic form and specific mass occupying space, but rather the centre of an accumulation of spatial and social interactions. The site of the artwork – as place of creation as well as place of presentation – is central to the conceptual approach underpinning his works. As seemingly invisible material, tied to the experience of the viewer, time complements the vacuum of space.

On Sunday, September 21, 2014 in the Oberlichtsaal, the work 1416 m3 is premiered live in front of an audience. Recorded, it will be played back during the exhibition in rear-right corner of the main gallery. This composition has been written by US-based composer Gavin Gamboa (*1984, Mexico) following the concept of David Lamelas. The situational chamber piece for tenor and string quartet (which is performed on Sunday, September 21, 2014 at Kunsthalle Basel by the Austrian-Mexican tenor León de Castillo and the Marcel Rubin Quartet) represents sonically the amount of cubic meters at the Oberlichtsaal. The tenor will describe the architecture of the space where the concert takes place by filling each cubic meter of the space with sound.

More information about the music of “V”:
music.gavingamboa.net/1416-m3-concert-v/

More information about the exhibition of “V”:
www.kunsthallebasel.ch/en/exhibition/david-lamelas/