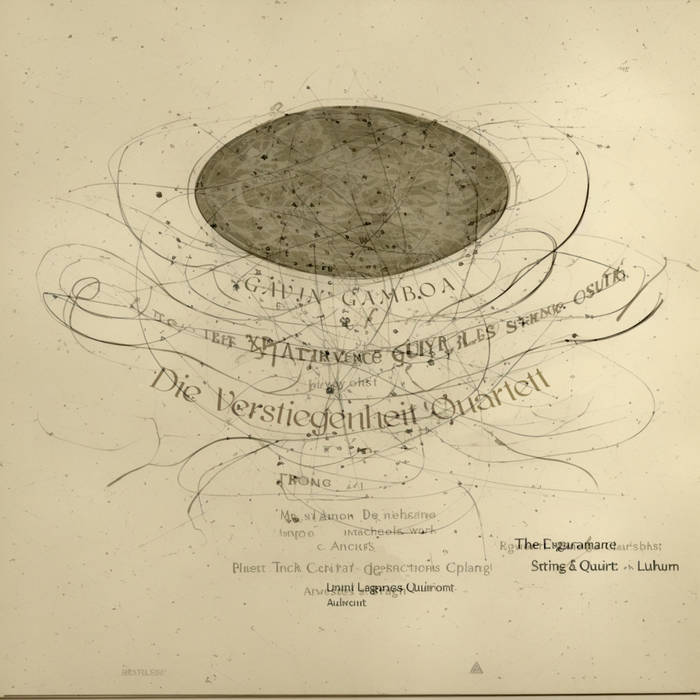 Verstiegenheit (or "Extravagance," as Jacob Needleman wittily translates it, relying on the root meaning of "wandering beyond limits") is spoken of as a distinct imaginative danger; but falling upwards we can distinguish as the process, and Extravagance as the state ensuing. Thrown forth by the intoxicating glory of participating in the precursor's strength, the ephebe appears (to himself) to levitate, an experience of affatus that abandons him upon the heights, risen to an Extravagance that is a "failure of the relationship between height and breadth in the anthropological sense".
— Harold Bloom, The Anxiety of Influence (1973)

I was struck by this passage in Bloom's analysis of poetry, and in particular the "outside help" that he discusses as the rescue from extravagance. These concepts seemed to be speaking to a similar and related process in the creation of this music, which I undertook with the aid of a machine learning model trained on the totality of music for strings that I have written and recorded, measuring ~3.5 hours, and using RAVE (Realtime Audio Variational autoEncoder) developed by IRCAM. It uses both Representation Learning (using spectral distance to build a perceptually relevant latent space) and Adversarial Fine-tuning (where the encoder is frozen, and uses a multiscale discriminator to increase the synthesized audio quality). RAVE represents a tradeoff between quality and synthesis speed in Neural Audio Synthesis, and for this reason I chose it to explore the potentialities embedded in a model trained on my own work.

The training relied on a Google Colab notebook executing Python code blocks (PyTorch) and took roughly 90 hours to complete. The end-result was a model object that parsed and identified various features of my music condensed into a black-box, an n-dimensional space of my creative output.

The first three movements (Landscape, Inner-self, Glance of another) were created using Unconditional Generation, where a 'prior' model is trained on trajectories yielded by the encoder and proposes new ones in an autoregressive fashion. Essentially the object generated output continuously, without any reference input to guide it. This yielded inconsistent results at times, and at other times was capable of generating the haunting, beautiful, and ethereal results that we hear.

The final three movements encode an input audio stream to latent representation, that the model then decodes and synthesizes using the data it was trained on to find a 'match' or isomorphic relationship within its own dynamic latent space dimensionality estimation. For these movements I used as input three contrasting works that I composed: a piece for solo piano (Estrangement); an electronic beat-heavy piece (Solipsism); an ambient electronic piece (Imagined glance of the precursor).

with CLIP guidance based on cover for Die Forelle by Franz Schubert (Published by Anton Diabelli, Vienna)